Back in early May I wrote,

Not long after closing the New York Times this morning, it occurred to me that everyone’s daydreams have been abruptly severed from any hope of being realized. Not excepting hacks young and old at the New York Times for whom the whole newsroom would rise in a prolonged standing ovation when they walked in one day; or take ambitious romantics like me. The lovers set to appear with our triumphs; the scenic beauty spots on different continents we’d see together; the hotel rooms and sensations at glamorous parties, stage events, terraces, galleries, restaurant tables; not to mention the wide-open wild canyon and mountain and pounding sea views; every perfect setting, every golden moment of imagined happiness, some we’ve held onto for years and years—for lifetimes—none of it will ever happen as we pictured. In our minds these reels still playing show ourselves successful in a vanished world. Image follows image; they’re like the lines of painted hieroglyphics striping tomb walls, the paint still fresh, the door sealed tight. And outside feels like a thousand-year sandstorm.

We’ve got ancient civilization in our heads.

But we’re alive inside these tombs. Living minds, with torchlight, and time upon time to puzzle out the processions of reed-bearing jackals and crocodile children that were our hopes. Why were we treating them like expectations? Why did we want all that stuff, anyhow? And did we really want to undergo more air travel?

Already this reads as outdated. That future of half hidden faces was illusory, it seems now.

Tonight, my neighborhood, quarter past nine, erupts with the sounds of an illegal fireworks show. A short one, maybe three minutes, I couldn’t see where with my limited view. Some bellowing cheers at the end and not a single siren followed. At street level, humanity is unencouraging.

I wrote that last paragraph on Memorial Day. Now it’s the fourth of June, coming up on a week of what the New York Times loves to call “unrest.” Protests and riots and blindings by rubber bullets and arson and looting and people killed and now curfews. Having flooded us, chaos is threatening worse. We pray for peace–I do, at least. But also I’m angry and it affects my mood, my point of view, my energies and how I direct them. I wrote a lot more last night and today I cut it, keeping only what follows.

This is male violence. This is the triumph of male violence over civilization and culture. It has nothing to do with race, the race talk is smoke, racism is just an excuse for the male population to rage around and act paranoid and climb onto soapboxes and use crime as a weapon—sometimes all at once. Far from being tragically coincidental, the staggering ineptitude on display at all levels of government in response is proof of deep kinship and even collusion. More mass gatherings, more riots, more anxious trigger-happy police, more weapons on the street, more stolen liquor and drugs circulating, more no-go hours, more destruction and waste of public wealth, and on every side more crime: this is a collaborative effort. The real tragedy is all the women showing up to march—for what? They say to protest, they’re very sincere, they don’t realize they’re scenery, nor that their role in the general surrender of public space to violent impulses is in fact a betrayal of their country, their educations, and their sex.

In April I wrote about mask-less men on the pandemic streets, and in mid-May I was making notes on them again; subsequently I saw Rebecca Solnit had put out an essay on the topic, but I think she missed a major point. Which, I said, is that for women and other vulnerable people,

fixing our worry (and/or political rage) on naked-faced men heightens our vulnerability to the ones in masks, whom our eyes pass over. Inevitably, violent men will take advantage. Masked, we might never see them coming, and no face to identify later; in effect we’re got a two-pronged endangerment problem, one that could take generations to solve, again, as it has been solved before, by the civilizing influence of women. Awash these past five years or more in crassness and vagrancy, public life will need to be cleansed, aired, and assiduously beautified.

But that new Progressive era lies far in the future. Right now we’re indoors, under a curfew that’s just the next step. Shelter-in-place set the process in motion and now all systems are go to get women off the streets and finally out of public life.

We had a good run. Nearly a White House.

With the novel FAMEPUNK, I’m interested in tracing the subtle Soviet-Russification of American culture in the Cold War’s aftermath; obviously, “our” capitalism overturned things there completely but the contact went both ways, as it must between warring powers; both are changed. In that case, they got fast food and real estate fever. We got more monopolies, more police state surveillance, more sclerotic bureaucracies. (Historians have been noting this phenomenon since the ancient Greco-Persian wars, it’s not an original observation of mine.) But here we come back to the present, and what it portends. The streets could soon be almost clear of women’s faces day and night. Women fearful, women home office-working or teaching their children, kept indoors; when in public, all the obedient women going masked; and all the looted liquor stores closed—almost twenty years on, the future here in once more war-torn New York City could be Wahhabite.

Later, I cut again and then again. I wanted to add: Look at that beautiful statue at the top of the page! What do you think happened to it?

By mid-June I’d started reading an old textbook called Chordate Anatomy that I bought for a dollar at the Strand, I think. It sat unopened on my shelf for years.

What is the world?

The world is what we know it is. Each living thing, unique, knows a world of one. Yet that world we know is what we’re in together—it’s out there, truly. This we know as well.

“The world has gone crazy.” What is the world?

Not only what preoccupies our days, if we allow the imposition. Mainly we impose upon ourselves, collecting disturbances to work themselves to death in our noonday esteem. That attention-grabbing “world outside” is no more outside us than memories; it consists of our own reactions set to repetitive labor.

Whereas the world we’re part of, the true world we know, doesn’t clamor in our heads. It holds us, holds everyone, every living thing. We privileged creatures of the hour—or Augenblick, more like—all equal in life, in breath, are held safe in one shimmering fabric spun from the tiny flip sides of everything transitory. This, the real, is the world to try knowing better. It has not gone crazy nor can it go crazy. Its contemplation educates. Though deaf as stone to demands, it is not emptied of obligations, in fact it is full of them.

To learn is one duty.

in the act of sitting her mind emptied of thought, and after dating the next place in her notebook by habit she looked at her pen, blue, blue-tipped, just floating there. She stared, her gaze drifting. She had nothing to say. The rooflines disappeared from the window view fixed in her eyes, replaced by an arriving Q train at the elevated stop; a long pause at the platform, the cars roofed and sheathed in—aluminum? Chromium? Steel? In the midsummer day’s sunlight a great silver glare, anyhow. And before she noticed she was blinded.

Her pen nib, extinguished, swallowed in a pool of orange light, touched bottom and continued unseen to write about itself, even with some vivacity. She’d shifted places on the sofa. Gradually dimness restored her sight of the page, which soon stopped filling. Nothingness was back.

Whatever I’ve been looking for in this time by way of progression has not occurred. My stuckness makes me glum; while creatively, maybe morally, maybe spiritually, the accumulated sameness of myself squashes me. Things that weren’t working, maybe broken, inside me, a whole solitary springtime didn’t fix and the recognition of their persistence arrives in the form of what I must admit is disappointment, irrational yes but genuinely weighty and oppressive. Interrogate this. Why wasn’t I myself alone enough to make me better? As if I should have been—as if I might have been. Really, my self-esteem is too stratospheric sometimes, to believe I didn’t require human contact in order to improve and thrive. Indeed I was riding for a fall.

Near the end of June I wrote,

Beyond its fullness glaring once or twice at my bedroom window hard enough to wake me, I hadn’t seen the moon since March until the night before last, when it appeared outside my kitchen. Yellow-gold, crescent, banana-shaped; a little warp in the windowpane gave it a brow ridge, a nose. The classic man up there, hanging in my sky, he was a welcome visitor.

Still I gazed, saw a thick glowing crescent, shadow-blemished near its inner edge which met not atmosphere but solid darkness, the red-black lunar night. Beneath my feet the planetary body responsible whirled on its speeding course as the illusion held: though propelled along I seemed stationary. The waxing moon with its funny man’s face hung motionless. We might have been two slips of paper pinned on a board.

Then the flatness gave way, the propulsion was over: in their place came a most powerful awareness of the great spheres involved in this part of the solar system. Here, Earth with the Sun at its back was casting shadows on its Moon. The spheres filled my mind with a deepening satisfaction not far from delight: so present, so real, proven so; their paths established, their harmonies set in a dynamic order beyond any moment’s power to spoil. The night spun past. Leaving the kitchen, I felt a surge of gratitude for having been born in a post-Copernican age. Its pleasures are intense.

I was reminded of something that happened on Bloomsday (June 16, the day 1904 on which the novel Ulysses is set). In the past I’ve attended some live readings of the book or parts thereof customary to the day, which this year were held on-line. From a lovely Calypso excerpt I was sorry to miss the end of the chapter, one of my favorites. The outhouse scene, funnily enough—for later the urge to read it again for myself grabbed me when I was sitting in my reading chair. So I reached for the shelf at my shoulder and took down the copy I have there (not the paperback from college but the old cloth-bound one I grew up with and signed as a scrawling child) and read what I wanted to. I felt like royalty. 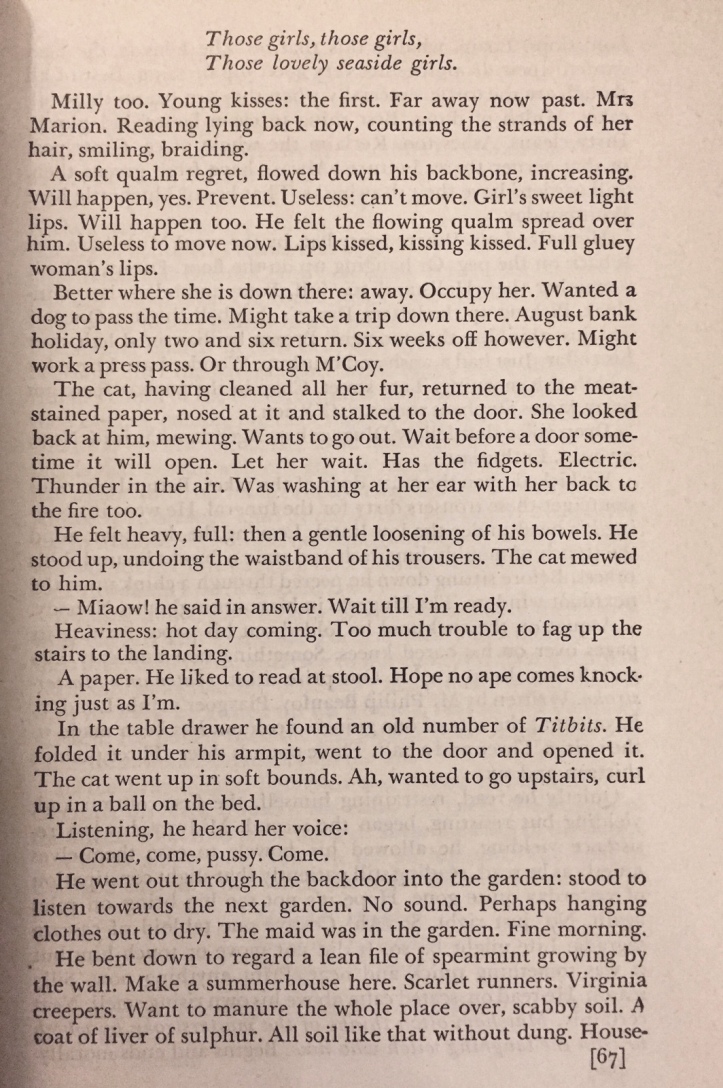