As a book full of children, LAMENT is necessarily concerned with their educations–their schools, their books, their favorite teachers. Musya herself becomes a teacher. She, her children and, later, her students, are essentially bilingual, Jewish children raised in Yiddish-speaking circles but whose public lives occur, eventually by force, in Russian. In this respect they share a common plight with Soviet Georgians, Ukrainians, Kazahks, Chechens, Germans, Finns, and the rest of the native speakers of some 60 languages recognized by the authorities of the time, not to mention the many that weren’t recognized and were spoken nonetheless by real people living in different parts of an immense nation. From the tsars to the Bolsheviks to the Stalin regime, efforts to create a Russian-speaking society persisted; still, by 1990, when the Soviet Union finally dissolved, no more than half the population spoke Russian. It had never become a majority language.

Why not? Maybe because it is extremely hard! But easier, as all languages are, for children to learn. In 1925, the Leningrad-based avant-garde artist Vladimir Lebedev published a Russian alphabet book–Azbuka–that appears to be taking Pinterest by storm. (I happened on it only weeks ago in an auction catalogue that came as a Christmas present from my sister Claudia, to whom LAMENT is dedicated.) A couple of pages, for the letters A and L: 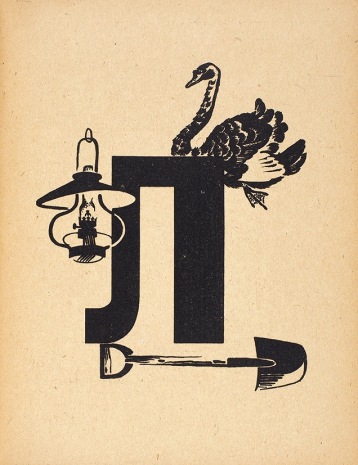 Lebedev’s wordless alphabet book of everyday objects and tools introduces the proletarian child to the brave new world of the Soviets. Preliminary drawings indicate that Lebedev conceived of the book in color, but he wisely decided on stark black and white for the final drawings. The result is a masterpiece of Constructivist construction. It is believed to be the first alphabet book that contains the modern Russian alphabet as it was modified after the Revolution. Pravda denounced Lebedev’s “Formalist” children’s books during the 1930s and he was forced to capitulate to the state-approved Socialist Realism.