On the ninth of May, Musya was sweeping. A pair of legs ran past the end of her push broom. A minute later another leapt right over the handle. She looked up. People running in all directions, their arms in the air, weeping, embracing: a fatal accident, a big one, she guessed. Dull with dread, she tugged the cotton from her ears. The world was shouting.

Someone picked her up, whirled her around a few times and left her there swaying. The broom had flown from her grasp to land beneath the assembly line belt where iron pieces were piling up unattended; she watched a few hit the floor. Then with great rattling groans all the machinery in the place started to shut down, as if overpowered by the workers’ voices.

A woman hurried past, then more women. Mothers! She followed at a run. It had been so long since she’d run, Musya’s body felt like an ungainly weight it hurt a younger version of herself to move. Others struggled likewise. Several corridors away the massive bird flock sound began to reach them. Every classroom in the school next door, erupting in joy, had emptied its shrill celebrations into the schoolyard. The shouting mothers burst into the midst of the screaming children and began a riot of indiscriminate kisses and hugs; some got the teachers, too, in clinches. Everybody loved everyone.

“Let’s get out of here,” said Sender Kotz.

This Victory Day in Russia may be the last major anniversary of the event for which a sizable number of Great War veterans will still be alive. Svetlana Alexievich, before she so deservedly won the Nobel Prize for literature, interviewed hundred of women veterans for her book published in English as The Unwomanly Face of War. I was so fascinated by one account in the book that I made a character in LAMENT into a veteran of the all-woman aviation corps it describes–a famous one, as it turns out:

Summer this year found the dvornik at a zenith of happiness. Her daughter was home, besholem, safe and sound save for the burn scar stripes branded into her forearms and a troublesome hernia. In the Air Forces she’d served at the front in one of the three all-woman squadrons organized by Marina Kaskina, the great aviatrix. Kitty had stayed on the ground, loading old low-flying Po-2 crop dusters with anti-personnel fragmentation bombs. Plywood and percale, powered by chattering five-cylinder engines, the little biplanes—kukuruzniki, corn-pickers, people called them—turned into flying torches at one hit from a tracer round. They couldn’t carry more than four bombs at once; each bomb weighed about sixty kilos. The pilots flew twelve or more missions a night, cutting the engines just over enemy lines to swoop in on their targets like owls. Sortie after sortie, if they survived, they’d taxi back in from the darkness, empty bomb cages white with engine heat, and take off again, loaded at lightning speed. “Do you know how heavy is sixty kilos?” Kitty asked. One bomb after another to haul hoist and load on the run, all night every night—and they’d all been girls on the ground munitions crew, barely more than schoolgirls. Kitty was twenty now. She wore a truss. She’d gotten used to staying up until dawn; she’d also returned with a ferocious smoking habit which her mother deplored, a single flaw to season the dvornik’s joy. 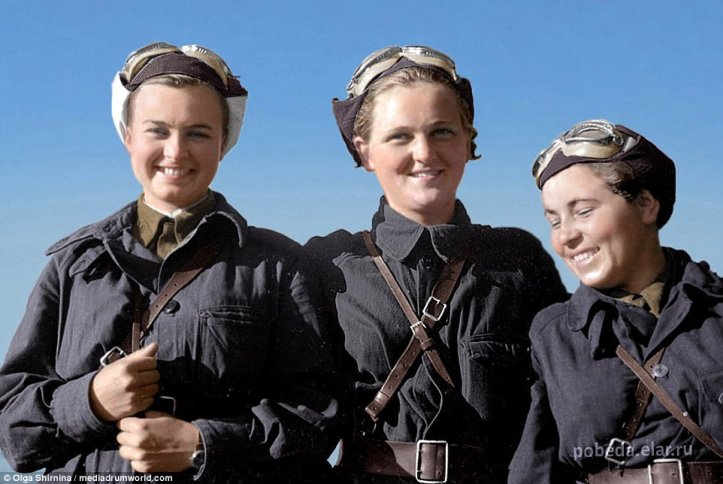 More images, brilliantly colorized by Olga Shernina of Moscow, here, from the Daily Mail. Quoted passages are from the forthcoming second edition of LAMENT.