Updated May 2020 to reflect improvements from the second edition of LAMENT:

In the gate lights’ glare Anton’s eyes looked huge with exhaustion shadow. He kept flinging himself out of nightmares, chased awake by Fascism, the awful Enemy of Culture. Hulking, incongruously silk stovepipe-hatted, with a hair-covered yellow torso, Nazi armband, gorilla features, a belt full of knives and a large blood-dripping axe carried poised for further use, this monster came from a patriotic wall poster made popular in the years before the war. The artist had planted one of its legs through a framed canvas and surrounded it with wreckage and ruins, tumbled philosophy books, broken antiquities. Angry and watchful only for more to murder and smash, two dots for eyes appeared fixed on the monster’s next victims. Many parents had complained, she’d been told. The poster was gone from the school hallway but the damage was done; also city-wide the image remained fairly ubiquitous. Anton kept struggling up out of sleep in the coils of his tiger skin to cry, “The hat, the hat!” The rest of the family had learned to sleep through. 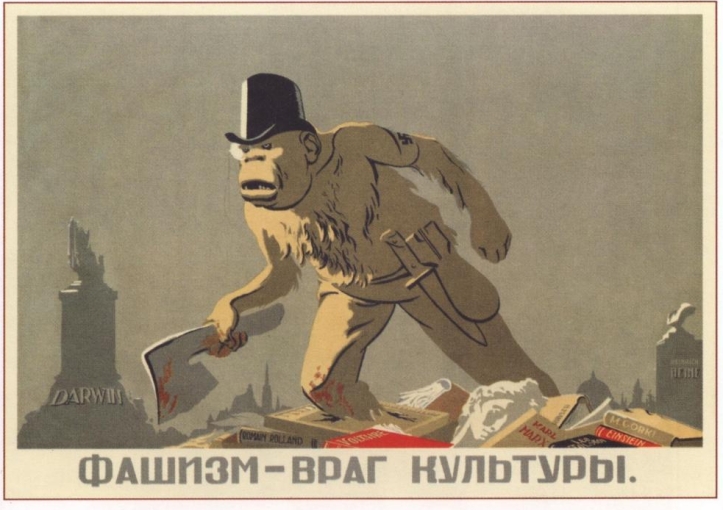